It’s been a couple of weeks since I came back from Let’s Test 2013 and truth be told, my head is still spinning with ideas and new things I want to try and with the feedback from the new approaches I already applied.

Now 2012 was already great but I spent most of my time in the company of my partner-in-crime Zeger van Hese getting to know & being introduced to people.  However grateful for that, I promised myself to be more active and go out a bit on my own this year.  Not an easy task to set for a strong “I” in an INTP type.  I can fully enjoy being in a company and discussing topics but it drains my energy at an alarming rate.  Combine that with the fact that my brain is constantly in overdrive at such an event and I can come across as a bit distracted, not-always-very-approachable odd Belgian dude.

Being aware of this, I set simple goals : sit at random tables, join in on conversations, listen to people and compliment them on effort and ideas (opposed to the ‘yes, but … I can be when on familiar grounds), actually put up a card if I’m having a question or want to add to a thread….  Small achievements maybe but nonetheless things I could be proud of for myself at the end of the day.

On the event side, 2013 often proved to be a very difficult year for picking out the workshops and sessions as there was such diversity and so many good speakers (old & new) ; James Bach and Scott Barber each had a great session, Simon Morley (whom I met last year) did a workshop I liked a lot but I’ll dedicate a new blog post to that one and of course Johanna Rothman.  I heard a lot about her but never saw her in action.  What an amazing woman, if not for anything else, then at least for the art of bringing humour to life in a self-reflecting presentation.   Other “pleasantly surprising” & memorable moments :

“Learning to say No”, workshop by Fiona Charles

Out of my regular comfort zone but I’ve seen Fiona at work a couple of times now and I was really eager to attend one of her workshops.  She has the ability to put people at ease while still pulling out all the information & willingness needed to make a workshop successful (and I should know,  I even volunteered for a small role-play scenario). 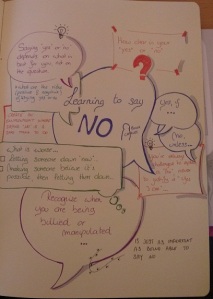 Learning to say No

During the evening, I took my hastily scribbled down notes and put them into an overview because I know this poor overburdened scrum master in my team and he can’t say no … at all (opposed to myself ; I  try to take people’s feelings into account but deep down inside, I care very little about any emotional state).

We went over the tips & tricks from the workshop and he promptly ran off to book his (long overdue) vacation donning the “Yes, if” and “No, unless” statements as his new armour.  It’s all about small improvements, one at the time no ?  😉

After the call for teams, a deviously delicious group formed the Cunning Linguini’s (Zeger van Hese, Ruud Cox, Ilari Henrik Aegerter and Levente “Levi” Balint) putting together enough brain-power to scare even the hell out of Huib Schoot’s Dutch team of uberness  … they were mysteriously absent on the second evening 😉  We picked Mumble as our session software victim and after a preliminary round of exploration & gathering findings on evening 1, we blasted away on the recording functionality on the second evenings big finale.  The outcome ; a drawn mindmapped report (according to the lessons learned in James’ workshop) divided into 4 threads (we decided to use testing threads to enable us to move from one idea to another more freely) and a list of 11 possible issues and 4 concerns that needed further examination.  It’s amazing what people can achieve in 90 minutes when putting their (different) minds together. 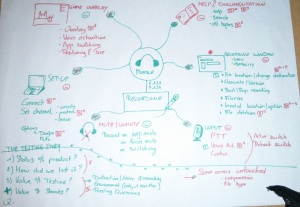 The lab proved again (another great job by Martin Jansson), to be the place for a fun-filled evening full of software and as a première ; actual hardware black-box testing machines (of which 2 out of 3 were sent back in a less operational state …. ).

I really got into this way of thinking and structuring my ideas and work (and thanks to Ruud Cox for the golden tip on practicing at least once a day and that it doesn’t matter how well you draw, it will get better.  Of course … easy for him to say as he makes fantastic drawings.  So I tried out direct note-taking during some of the sessions.  The first was Maria Kedemo’s “Hiring to solve the puzzle”.  On the presentation itself ; It certainly takes courage to do a presentation on something you are fairly new to but she aced it.  And looking at my drawing, it was nicely structured with a balanced amount of information and take-aways since I was never in danger of screwing up the layout of the note so kudos to you young lady. 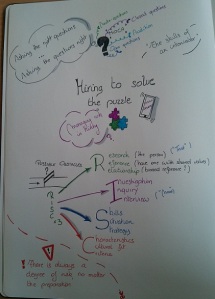 Zeger was one of the other subjects victims.  Although we discussed the topic of “Testing in the age of distraction” he didn’t give away a lot of actual content so I was very curious … even more after the mentioning of squirrels  (I even practiced drawing mini-squirrel shapes beforehand).  I’ve known him for years but I’m still amazed at how he can formulate ideas and thought into a 35 minute session.  It would be a challenge to work out our duo-track idea because we complement each other well but also vary a lot on other levels.  Maybe we’ll have to upgrade to badgers ! 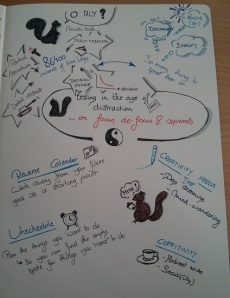 Testing in the age of distraction

I got home late, late Wednesday night, completely exhausted and  fuzzy-minded from all the information processing going on in my brain.  On Thursday, I had the usefulness of a wet towel at work but after a couple of days, my mind started to pick up pick up signals from the various teams and combined them with the gathered ideas.  We are now a month later and I’m still noting down ideas and gently feeding new things into my / our way of working.

There is also a lot of feedback from developers and analysts asking me “What was that thing you went to in Sweden ?  I mean, this is great but isn’t it a bit far away from testing ?”

I love the smell of that question on a weekday morning ….

“What is testing to you ?” I return the question.  We go for a coffee and a chat.  Small steps remember.